Happy Paint a Rug Party Reveal Day! Did you get the day off work? Just you wait, next year it will be a national holiday.

I've had three weeks to put this sucker together (catch up on week 1 and week 2 if you missed it) so let's see what we've got.

First, to answer the question from last week. The votes were a lot tighter than I thought (thanks to everyone who shared their opinion), with Navy/White squeaking out a win. However, I forgot about one important voter - the hubs. He came home that night and said 'yeah, I don't want a pink rug.' I was so impressed that he actually read it, that I gave him the deciding vote. So Navy/White it is. (Don't worry, you'll be seeing the raspberry somewhere else soon)

As I mentioned in week 1 I read thru a few tutorials and decided what I would need to make this happen. With the kids in bed and a nice cocktail in hand. I got started. 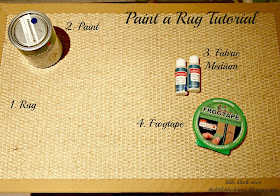 The rug was brand new ($9 from HomeGoods) so no cleaning was needed. If you were doing this with an existing rug, I would make sure you vacuum the crap out of that sucker before painting.
The first coat of paint needs to be the color under the tape (remember that whole negative space thing) so the white paint went on first. I just used some Kilz (in white) I had on hand and mixed it with one bottle of fabric medium. But I didn't measure it out exactly. I guess I'm more of a chef than a baker. Anyone who watches Top Chef knows this difference.

The first coat went on and I wasn't encouraged. The paint did not spread. At all. It basically just stays wherever you pour it. It took a lot of muscle to get that paint to spread at all. I tried both a brush and a roller and found that the brush is best to begin with to get in all the little crevasses. (with a sisal rug)  Then, finish off with the roller. 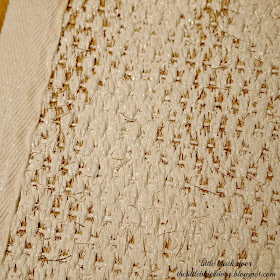 THREE coats later (2 coats with a brush and 1 with a roller), here is where the night ended. 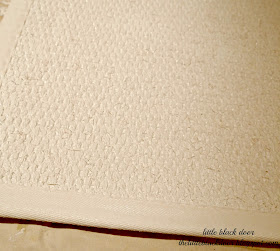 With Step 1 complete, I let it dry overnight. 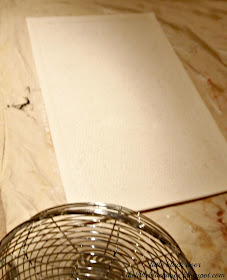 I made my two base lines, making sure that the tape met right in the middle of the rug (the only measuring I did.) 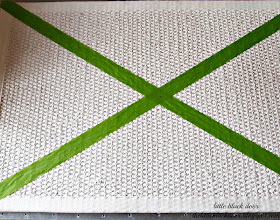 I thought I'd have to measure out each piece of tape to make sure everything was consistant. But to my great pleasure, once I had the middle taped and knew that it was in the center of the rug, I realized I just needed to tape from that center outward in each section and they would all work out to be even.


So using my level as my spacer I taped out the first section. 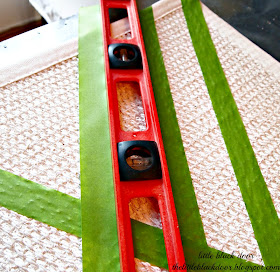 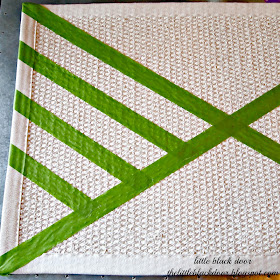 It can get a bit confusing to keep track of which lines should go which way so it is best to think by section. The lines of each section should go the opposite way of the lines from the previous section. Clear as mud? 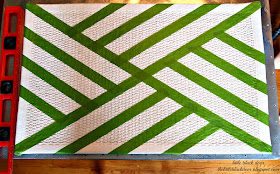 With the rug taped out, I pressed the hell out of that tape working to get it as tight as possible to limit bleed.

Then, I poured out my paint and fabric medium to mix together. Hmm, I could have sworn the paint chip I gave to Home Depot was Navy. This looks awfully...royal. 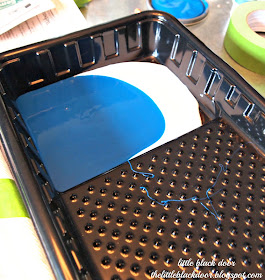 Worried about the color, I went ahead with the first coat. It covered only slightly better than the other paint, probably because there was already 3 coats of paint that had filled in some of the gaps in the rug. However, you still gotta put some muscle into it. 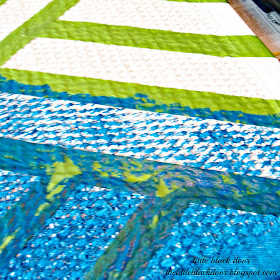 After the first coat it still looked more royal than navy. I tried not to freak out and hoped it would get darker once it was dry. 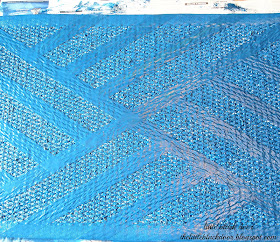 No dice. Not blue enough and not the color on the chip. Mistint. Not cool Home Depot. Not cool. Luckily my brilliant hubs suggested we add some left over Farrow&Ball black to darken it up a bit. Extra birthday present for you my dear. So I mixed in some black and arrived at a color I think I want to market. I will call it Midnight in St. Louis. It will sell like hot cakes. 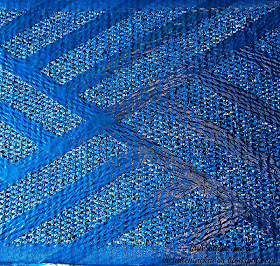 Much better. Just like with the white, I went ahead and did three coats of the blue as well. I let it dry, again, over night. Then pulled off the tape to discover this. 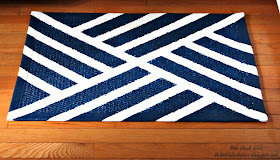 Wahoo! I was actually really impressed with how well the tape did to prevent bleed. There are a few spots that could use some touch ups, but I've decided I kind of like the imperfections. And I'm not at all saying this because I'm tired of painting this sucker. 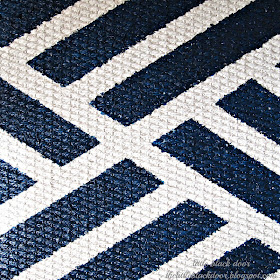 It looked so good I decided it was the perfect addition to the kitchen.  It's happy and does a great job of hiding all of the things that someone seems to drop in front of the sink. 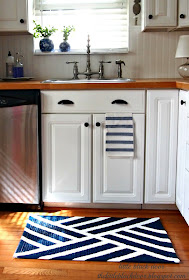 It also feels a lot better under foot than I had anticipated. Not sticky and maybe even a little less scratchy that plain old sisal. 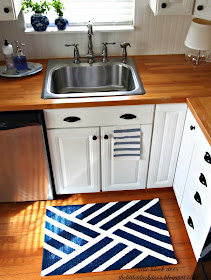 I'm glad I did this and I'm happy with how it turned out. I say give it a try. It's much easier than you would have thought. Thanks Linda for thinking this fun up!

Now let's go check out how all the other ladies did!

I love it when you sweet talk me! It makes my day!
And please make sure you leave an email address so we can keep the convo going.